We need a reform of the Olympic Qualification system in fencing. For most of the member federations, participation in the Olympic Games is only a distant dream. A very limited number of fencers are qualified individually due to the fact that qualification to a team event automatically qualifies three fencers to the individual competition.

In every individual event, at least two thirds of the fencers have not qualified individually but because they qualify in teams. For federations who don’t have the funding to compete for team qualification which is an expensive multi-year endeavour, the chances of qualifying an individual fencer is very small.

Many world-class fencers have failed to qualify in this system. For fencing, this situation is bad since it makes it difficult for all the nations who can’t participate to develop. Having fencers in the Olympic Games is the major possibility to make the sport known nationally and to attract new fencers into the sport. It is of course also important for the financing of the sport.

Thus, fencing is not growing as it should be and threatened also in the countries where fencing has a long tradition.

The Swedish Fencing Federation has made an analysis of the participation in the Olympic Games and we have also has put forward a proposal for a reformed qualification system to the FIE Congress. The FIE has chosen not to present it to the Congress or send it out to the member federations but you can find our statistics, our proposed system and a simulation of how it would work if implemented at here.

Another possibility to increase the participation would be if the so called P-Athletes would be transformed to regular athlete accreditations. The P-athletes ar the substitute athletes of the 48 teams who are present at the Olympics but only accreditated if they are substituted into the team competition,

In his reply, President Usmanov explained that the FIE had had already put forward these proposals to the International Olympic Committee who would not accept this solution at present.

The Olympic qualification in fencing needs to change in order to reduce the concentration of Olympic medals and high level fencing to only a few countries. The current qualification system also needs to change because it makes it impossible for some of the worlds top ranked fencers to participate. This is the essence of a proposal put forward by the Swedish Fencing Federation.

Since 2004, 70 percent of the Olympic individual and team medals in fencing have been won by only six countries: Russia, France, USA, China, Italy and South Korea. These nations have more than half of all the team starts in the period. Six countries is only 4 % of the 153 members of the International Fencing Federation.

Individual participation should be based on individual qualification. It is not fair that more than two thirds of the athletes that compete individually should be automatically qualified through team qualification and take the place of higher ranked fencers from other countries.

The current qualification system makes it very difficult for the majority of the fencing world to qualify for the games. Our sport cannot grow and develop if the participants at the Olympics always come from the same countries. Statistics from the Olympic Games in Athens 2004, Beijing 2008, London 2012 and Rio 2016 show that a small number of fencing nations dominate fencing.

If no action is taken to change the principles of the qualification, it can have severe consequences for fencing. We can already see that fencers from nations who don’t qualify for Olympic team competitions gradually lose their position also in the individual world rankings, since failure to make Olympic qualification usually results in loss of funding from the national Olympic committees. Soon, this situation can become irreversible.

The Swedish proposal aims to reduce the impact of the team competitions by making the individual and team qualifications totally separated.

We believe that it could be possible to limit the number of teams to only four per competition. Fencing could organize a pre—Olympic qualification where the last stages of the competition, semifinals and medal matches, are fought at the Games. This would also be in line with the Olympic Agenda 2020 + 5. 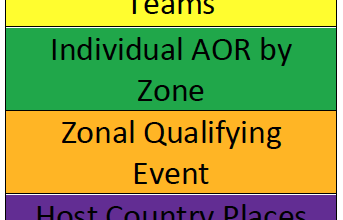 Simulation of the Tokyo Qualification with Our Proposal